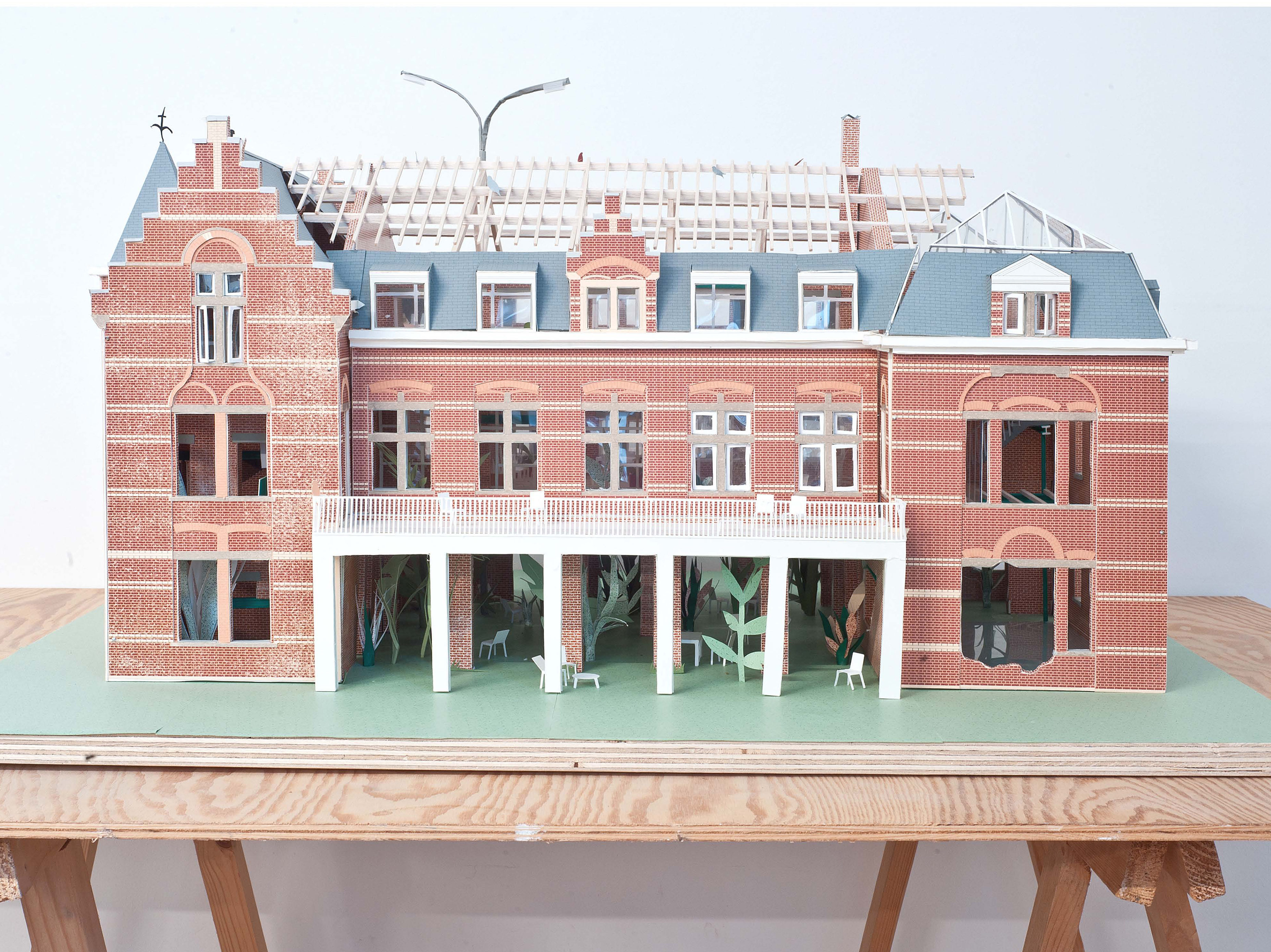 The Saint Jozef Building at the Caritas Psychiatrc Centre gets an unexpected second life as monumental outdoor space. Architecten De Smet Vermeulen, Architecten De Vylder Vinck Taillieu and noAarchitecten were asked to make a proposal in a limited invitation to tender. In the following we shortly describe the proposals presented by the three offices (June 2015) and discuss the very different but equally relevant impact on the ambitions of the project definition.

The history is remarkable (see Psyche 27/1, March 2015). The stately Sint-Jozef building in the heart of the campus was under demolition. In the meantime, a vision has been developed within working groups bringing together psychiatrists, management, staff and patients discussing the ‘Psychiatric Centre of the Future’. Many ideas on the general layout of the campus, formulated within the working groups, turned out to wonderfully fit the existing building. Halfway the process, the demolition got delayed as a result of asbestos removal. The break was the little help needed for the management to gather courage and halt the demolition definitively.

In the working groups a new project definition was formed as a collage of desires. For example, Sint-Jozef was described as a monumental outdoor space that serves as a central meeting place, a rambla to stroll around, a hideout, a lookout, a wishing wall, an in-between space, a sitting area to smoke a cigarette and so much more. The expectation was that the creation of a space with no specific therapeutic use, would nevertheless have a therapeutic effect on the well-being of the patient. And, an equally effect on the working spirit of the staff and the desire of family and friends to visit the patients.

Finally, the building was named Kanunnik Petrus Jozef Triest Square – in short: Joseph. The participation of psychiatrists, management, staff and patients gave an innovative meaning to the hollow and often abused fashion word of ‘healing environment’. Below we describe how the three design sketches bend the unusual project definition and bridge, each in their own way, the spatial environment and care context. The design proposal by De Smet Vermeulen architecten stems from an ambition to let the image of hope prevail over decay. Instead of deliberately staging a ruin, the west wing of Sint-Jozef is converted into a closed-off, detached villa with mansard roof. Other parts of the building are removed, leaving only few traces on the ground level and reusing the building lines. As such the loggia in the central part of the Sint-Jozef building is converted into a pergola next to a memorial pond in which a motif from the original building – the crow-stepped gable – is integrated. The building’s east wing serves as the foundation for a huge greenhouse conceived as a workshop space.

A second aim is to convert the Sint-Jozef building into what they defined as a ‘verkleinde wereld’ (‘reduced world’) with clearly defined and programmed entities. The design proposal shows a tri-partition – villa, pergola, greenhouse – in which each part differs from the other in terms of both form and future use. The western wing, now transformed into a detached villa, provides several workshop spaces to be used as part of the therapeutic process, in connection with a studio for an artist in residence. Patients are given access to the villa with a key plan. The greenhouse is presented as a huge workshop space. The design proposal by architecten de vylder vinck taillieu keeps the Sint-Jozef building in its current state of partial demolition. Traces of destruction are carefully restored with contrasting materials, making the stiches visible as such. The building is opened up as a complex void with varying degrees of accessibility, light, transparency, closeness, nature, collectivity, etc. Seemingly at random dividing walls are perforated and even lifted from the ground. Floor partitions are partly removed and enable vertical sightlines from ground floor to attic. The roof is removed but the timber frame structure retained. Plants and trees are scattered in the interior, turning the building inside out.

The resulting network of enclosed outdoor spaces provides a surplus of space that can be freely used and appropriated by anyone. One of the few additions is the mirroring of the porch from the front façade to the rear. Also, all windows on the ground level are opened up to function as door gates. The modest interventions create a maximum effect in repositioning Sint-Jozef as the main building in the centre. The transformed building appears to have multiple front façades, making the square accessible from all sides – especially from the adjacent Jericho building (at that time housing the psychogeriatric department) and the Wasserij (an empty building that would function as a cultural centre in the future). At the same time, the transformed building organizes a 360° view from the building to the environment.

The general aim is to postpone as long as possible the decay of Sint-Jozef and to keep track of the decomposition process. For this reason the building is stripped of all organic material, leaving the brickwork visible and unfinished. Wood decay is prevented by leaving the timber work bare. The building structure is kept intact insofar as possible, avoiding irreversible interventions that put a mortgage on the future of the building. It means that the complex can easily be adapted according to the changing needs and desires in the psychiatric centre. The design proposal by noAarchitecten presents the Sint-Jozef building as a folly in the heart of the psychiatric campus. The building’s two transversal wings are kept intact. In the central section, only the front and rear façades are preserved, while the glass windows are removed and the cornice is irregularly finished. The roof and timber work are taken out. In the central part of the building, the interior is transformed into an enclosed garden with high trees and exotic plants.

The aim with the Sint-Jozef Plein is to provide a different, mental space where patients can retreat from the daily business in the psychiatric centre. The Arcadian garden combines tall trees with room for a herb and experience garden. The suspended bridge connects the building’s west and east wings and creates an opportunity to have a view above the treetops. In the side wings of the building, various intimate rooms are organized, such as a piano room and a sitting room.

In the proposal, the requested space for common activities is strategically kept unanswered. The idea is to organize festivities and gatherings on the lawn in front of Sint-Jozef and the surrounding building, for example in the empty Wasserij. Evacuating the public activities means that the Jozef Plein can be kept as a retreat. At the same time, the ruined structure can function as landmark even more than before. The architects note that in the historical ground plan, the pavilions are asymmetrically organized and together form a curious, layered scenery that invites patients to linger.