The Gay Architecture: On the ‘Famous’ project by aDVVT 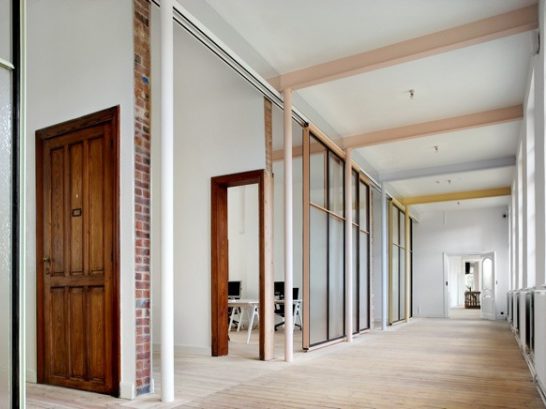 The question if architecture in Flanders is right to present itself as one of the fine arts or not, is a question that undoubtedly results in endless debate. Either way, it is clear that architecture is the most serious, not to say the most boring, of art forms. Have you ever seen someone burst out in laughter in the face of architecture? No, I am not talking about the architects who secretly chuckle at the appearance of the Flemish urbanisation full of façadism and pseudo-cottages [1]. Such disapproval about popular architecture is no more than a routine of ‘canned laughter’ in television shows [2]. Equally cheap are the jokes about the stucco Flemish modernism and the good taste of the yearly architectural reviews. No, I am thinking more about the spontaneous fit of laughter bursting out in an opera house during the third act of Rigoletto, when the Duke of Mantua strikes up a frivolous aria about the caprices of women [3]. I am making a case for the project ‘Famous’ (2013) in Groot-Bijgaarden, Belgium, by architecten De Vylder Vinck Taillieu (aDVVT) as something that comes nearest to an architecture comedy.

1) An architect no longer excuses himself

The Priory of the Abbey of Groot-Bijgaarden was transformed into an office space for the advertising agency Famous (today part of the multinational FamousGrey) [4]. The impressive Rococo-style façade of the Priory was left untouched. Once inside, an astonishing spectacle unfolds. The corridors, where once the Lasallian Brothers roamed, have been transformed into a playful setting with bright colours and light. The dignified rooms of study have been opened up. The corridor wall has been replaced by sliding doors to present the workspaces to the people passing by. The head ends of the walls are left exposed and show the traces of demolition. Coloured beams and columns in steel are added to stabilise the construction. Old remnants of paint and wallpaper, discovered by removing suspended ceilings and shelves, are visible everywhere. In closing one office with a sliding door, the adjacent one is opened. Door panels were removed and reinforce the enfilade of spaces. The doors are always open (they seem like human-sized versions of Kafka’s open gates of the Law). Accidents follow one after the other. Coherence seems to be far-fetched. Adhocism is the only rule within a colourful layering of meaning [5]. Assemblages of fluorescent lighting become contemporary chandeliers. In the attic, the workspace has been organised using folding tables. Beneath the wooden timbers, a greenhouse suddenly appears as a print room. Bart Verschaffel describes the work of aDVVT as a form of mannerism in which “everything resolves around the particular ‘way of expression’ [of the architect].” The mannerist effect is that “[…] every time one looks outside, one also continues to see and becomes aware of the architecture [that frames and divides up the vista].“[6] It is an architecture that presents itself – self-assured and proud, yes, but playfully self-reflective at the same time.

2) The commissioner does not excuses himself equally

The architecture of Famous not only shows how an architect does things, but how a client does things as well. In a visit to Famous, it is clear how the employees are at home in the old Priory – a look at the website says as much [7]. A creative young lot squats a historical complex and jokingly states not being original. The joyfully disturbed workspace is tailor-made for the creative class with its typical bohemian mixture of a hedonistic life style and Calvinistic work ethos [8]. The entrance space and refectory on the ground floor have become meeting rooms. It is the perfect setting to welcome clients in style. The study spaces, library and other stately spaces on the first floor have been occupied as offices for the account managers. They drink expresso in sofas while discussing the latest client brief. Here and there, an old desk or bookcase is still lingering. In the attic, the creative workforce labours on the next campaign. The enormous wooden timbers create a warm and discrete atmosphere. The neo-Gothic church has become a stately décor for receptions and all sorts of parties. On the terrace, overlooking the park, the director confesses: “You know, since we are here, the clients come to us! They see it as a little trip.” Another staff member jokes about the fun character of doing creative business amidst seniors strolling in the park. Times change. When Famous was still based in Anderlecht – a site of social conflict and endless traffic jams – the creative entrepreneur had to visit the clients himself. The green oasis with seniors strolling around, the hip atmosphere in the Priory and the highway exit nearby, are all pieces of the puzzle of a surreal Gesamtkunstwerk for the creative class. The architecture of Famous is, using the words of Charles Jencks, a “giant metaphor proclaiming its own function.”[9]

There is an interesting prehistory to the realized works of aDVVT in the Abbey of Groot-Bijgaarden redevelopment. It shows how a big if not the most part of architecture production consists of dream images that allows to speculate and apprehend a future for a certain spatial capital, in this case the religious heritage. Although left aside by history for unclear reason, paper architecture is something more real than reality. It started with a design for a gym extension (2010) to the former school. Next plans show a project for senior housing in the former infirmary (2011). Later the school was to be re-organised as service flats for seniors and luxury housing. In the meantime the development of a care village in Dilbeek was envisioned, in dialogue with the same client, under the umbrella of the Pilot Projects Invisible Care by the Team Flemish Government Architect [10].

3) A culture has never been looking for excuses

The architecture of Famous may stand on its own while being a perfect setting for the creative class at the same time, ultimately it is about the repurposing of religious heritage. The Abbey of Groot-Bijgaarden was built on the foundations of the 12th century Saint-Wivina-Abbey. The Lasallian Brothers have left the monastery. The Wivina Ltd., a joint-venture of demolition contractor De Meuter and project developer Verdoodt, acquired the property. Ambitious plans for the future of the abbey are drawn up by aDVVT. The protected character of the Priory didn’t match the business plans and was immediately sold to Famous. Behind the Priory, Wivina Ltd. built a park residence with serviced flats designed by aDVVT – a heaven on earth for seniors, with a care hotel, restaurant, underground parking and other communal facilities [11]. The reconstruction of the park followed the design of landscape architect Bureau Bas Smets – project BBS155 [12]. The park was transformed into an enclosed garden, including a forest, orchard and pond. The religious remnants function as a wilful statue collection. In the former infirmary down the hilly park, there are plans to organise a bed-and-breakfast. A new development will hopefully start soon at the former Brothers school building, a design by the famous Alfons Hoppenbrouwers in 1963. The Brothers have retreated the study centre of the Flemish Lasallian Perspective into the former building of the abbess near the pond. The tiny ‘Chapel of Disclosure’ – a wonderful design by Tom Callebaut and Cindy Tirry (TCCT) – is a last sign of religious presence. “The abbey as a monolithic concept has been shattered […] within the context of a pluralistic programme,” says a friendly Brother while we stroll through the garden. He continues: “it is not an architectural project, but a step in a historical process that speaks to people momentarily.”

How time has passed since the late Belgian historian Geert Bekaert rushed the architect to the rescue with a call to order: “since when does the architect need to make excuses for what he does?” It was in the late eighties. At that time, building in Belgium was defined by project developers and common sense contractors, and the title of architect was considered to be a ‘last obscenity’[13].  A whole generation of Flemish architects fought an arduous battle over recognition for their craft [14]. The private house was the point of departure, a commonplace architecture the result. It explains why Flemish architects remain deadly serious. But these times change as well. In the face of the oeuvre of aDVVT, the public can laugh wholeheartedly at the brilliant lightness put on show. The project Famous is a colossal joke: the unique moment when architecture, as design, commission and culture, transcends itself into anti-architecture [15].

[2] Lieven De Cauter, The art of joking & the yoke of arting: Humor as the limit of art: From Hegel to Dada and beyond, in: The Journal for Philosophical Anthropology, Archeology & Aesthetics, Volume XXI, 2001. Slavoj Zizek considers ‘canned laughter’ the core of inter-passivity, in: Slavoj Zizek, The Ticklish Subject, Verso (1999).

[3] ‘La Donna è Mobile’ is an aria in the third act of Giuseppe Verdi’s Rigoletto (1851) – see the performance of Luciano Pavarotti: https://youtu.be/xCFEk6Y8TmM

[15] Lieven De Cauter, The art of joking & the yoke of arting: Humor as the limit of art: From Hegel to Dada and beyond, in: The Journal for Philosophical Anthropology, Archeology & Aesthetics, Volume XXI, 2001.