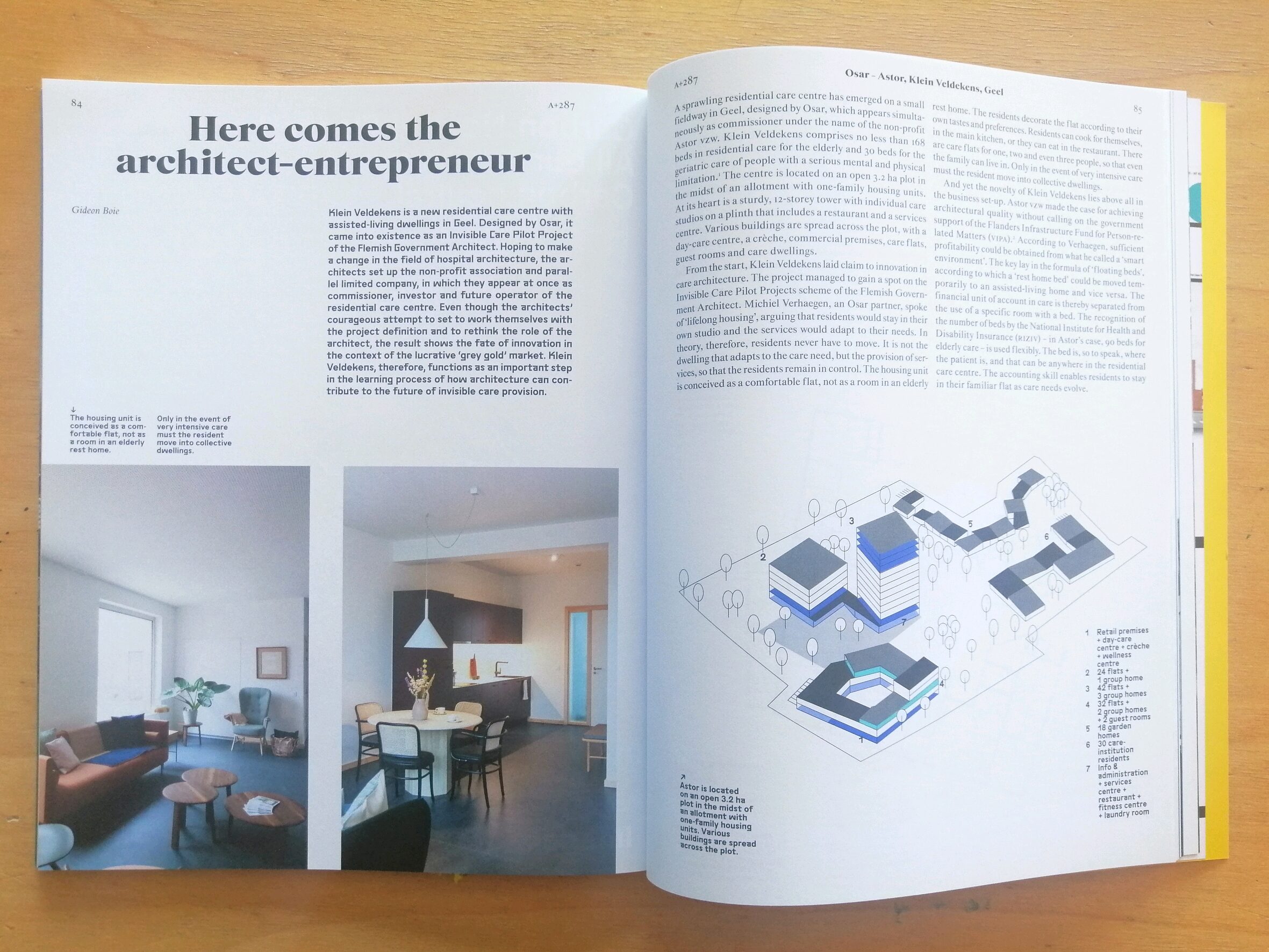 Klein Veldekens is a new residential care centre with assisted-living dwellings in Geel. Designed by Osar, it came into existence as an Invisible Care Pilot Project of the Flemish Government Architect. Hoping to make a change in the field of hospital architecture, the architects set up the non-profit association and parallel limited company, in which they appear at once as commissioner, investor and future operator of the residential care centre. Even though the architects’ courageous attempt to set to work themselves with the project definition and to rethink the role of the architect, the result shows the fate of innovation in the context of the lucrative ‘grey gold’ market. Klein Veldekens, therefore, functions as an important step in the learning process of how architecture can contribute to the future of invisible care provision.

A sprawling residential care centre has emerged on a small fieldway in Geel, designed by Osar, which appears simultaneously as commissioner under the name of the non-profit Astor vzw. Klein Veldekens comprises no less than 168 beds in residential care for the elderly and 30 beds for the geriatric care of people with a serious mental and physical limitation.[1] The centre is located on an open 3.2 ha plot in the midst of an allotment with one-family housing units. At its heart is a sturdy, 12-storey tower with individual care studios on a plinth that includes a restaurant and a services centre. Various buildings are spread across the plot, with a day-care centre, a crèche, commercial premises, care flats, guest rooms and care dwellings.[2]

From the start, Klein Veldekens laid claim to innovation in care architecture. The project managed to gain a spot on the Invisible Care Pilot Projects scheme of the Flemish Government Architect.[3] Michiel Verhaegen, an Osar partner, spoke of ‘lifelong housing’, arguing that residents would stay in their own studio and the services were adapted to their needs. In theory, therefore, residents never have to move. It is not the dwelling that adapts to the care need, but the provision of services, so that the residents remain in control. The housing unit is conceived as a comfortable flat, not as a room in an elderly rest home. The residents decorate the flat according to their own tastes and preferences. Residents can cook for themselves, in the main kitchen, or they can eat in the restaurant. There are care flats for one, two and even three people, so that even the family can live in. Only in the event of very intensive care must the resident move into collective dwellings.

And yet the novelty of Klein Veldekens lies above all in the business set-up. Astor vzw made the case for achieving architectural quality without calling on the government support of the Flanders Infrastructure Fund for Person-related Matters (VIPA).[4] According to Verhaegen, sufficient profitability could be obtained from what he called a ‘smart environment’. The key lay in the formula of ‘floating beds’, according to which a ‘rest home bed’ could be moved temporarily to an assisted-living home and vice versa. The financial unit of account in care is thereby separated from the use of a specific room with a bed. The recognition of the number of beds by the National Institute for Health and Disability Insurance (RIZIV) – in Astor’s case, 90 beds for elderly care – is used flexibly. The bed is, so to speak, where the patient is, and that can be anywhere in the residential care centre. The accounting skill enables residents to stay in their familiar flat as care needs evolve.

Osar – previously known as FDA architecten en ingenieurs – ultimately tap into a gap in the market themselves.[5] They set up a construction with Astor vzw, the non-profit care institution that operates the service, and Igor nv, the capital vehicle that builds, finances and manages the facility.[6] In actual fact these are the same people. The boards of the non-profit association and the limited company are made up of the associates of the architecture firm and entrepreneurs active in real estate. After a red flag was raised for a possible conflict of interests, there was some reshuffling of the boards, but they have kept the formula since it appears to be profitable.[7] The idea is to sell Klein Veldekens on to a real-estate fund, after which the non-profit association will make an annual availability payment and potential returns will in part flow back in the event of a resale.

The appearance of the architect-entrepreneur brings us back to the Invisible Care Pilot Projects, launched in 2014 by the Flemish Government Architect Peter Swinnen and Welfare Minister Jo Van Deurzen. Five commissioners presented a design challenge to in each case three architecture firms. The Astor case was the odd man out: after all, Osar presented the design to itself, since the architect was the commissioner. The design challenge was therefore identical to the design solution.[8] The draft design therefore differs little from the final design. The main design change occurred after a local protest against expansion into a residential area. As a result of the protest, the number of beds was reduced from 190 to 168 and the tower from 19 storeys to 12.[9]

The entrepreneurial framework explains the strange interpretation of ‘invisible care’ in Klein Veldekens. The Flemish Government Architect wanted care to become part of the normal urban fabric by dismantling the classical hospital complex and reinforcing the social network in neighbourhoods.[10] Klein Veldekens does the very opposite: the elderly and sick are separated on a single campus and surrounded by supporting programmes that are to be found just as well in the field of care.[11] Even the restaurant fits in the idea of a total environment that hospitals have always been, albeit now in a corporatist variant. Klein Veldekens might sell itself as a ‘caring neighbourhood’, but it is not consistent with the social facilities in the village and, conversely, offers no services for the non-sick residents of Geel.

A symptomatic feature is the attempt to pick up on the centuries-old tradition of family nursing in Geel. In offering care flats for one, two or three persons, Astor was counting on a collaboration with the Public Hospital Care Centre OPZ Geel, where families with a resident patient would move to Klein Veldekens. The failed partnership should not come as a surprise. Michel Foucault described how family nursing in Geel originated in the Middle Ages as part of the pilgrimages to St Dymphna.[12] Pilgrims and patients were cared for by local residents. No wonder that family nursing did not fit in Astor’s real-estate project: it is an invisible form of care that you can’t grasp in an architectural typology and which you can’t make money out of.

Published in: Practices of Change, A+ 287

[1] The 30 beds for people with a serious handicap concerns a partnership with the Medical Pedagogical Institute MPI Oosterlo.

[4] However, it appears from a parliamentary question that both the services centre and the day centres did receive support from VIPA and the National Lottery. See: Tom Cochez, ‘Lucratieve financiële constructie achter Geelse woonzorgtoren’, Apache 11 July 2020.

[7] The tandem Astor vzw and Igor Balen nv has by now developed the assisted-living dwellings De Anjers in Balen and sold them on to a real-estate fund, Care Property Invest. See: De Tijd, 17 July 2018. Astor vzw is also working with De Zonnige Woonst cvba on the brownfield development Tasibel in Hamme.

[9] See the Facebook group ‘Nee tegen Hoogbouw in hartje Geel’ (No to high-rises in the centre of Geel).

[11] The concentration of the available capacity beds that RIZIV recognizes per region in Klein Veldekens led to a change of plans at Huis Perrekes in Oosterlo (Geel): while Open Call 2105 concerned the construction of a new residential complex, the programme ultimately involved the renovation of a villa on the other side of the street. See: www.vlaamsbouwmeester.be and A+ 283.