A separate house for addiction care 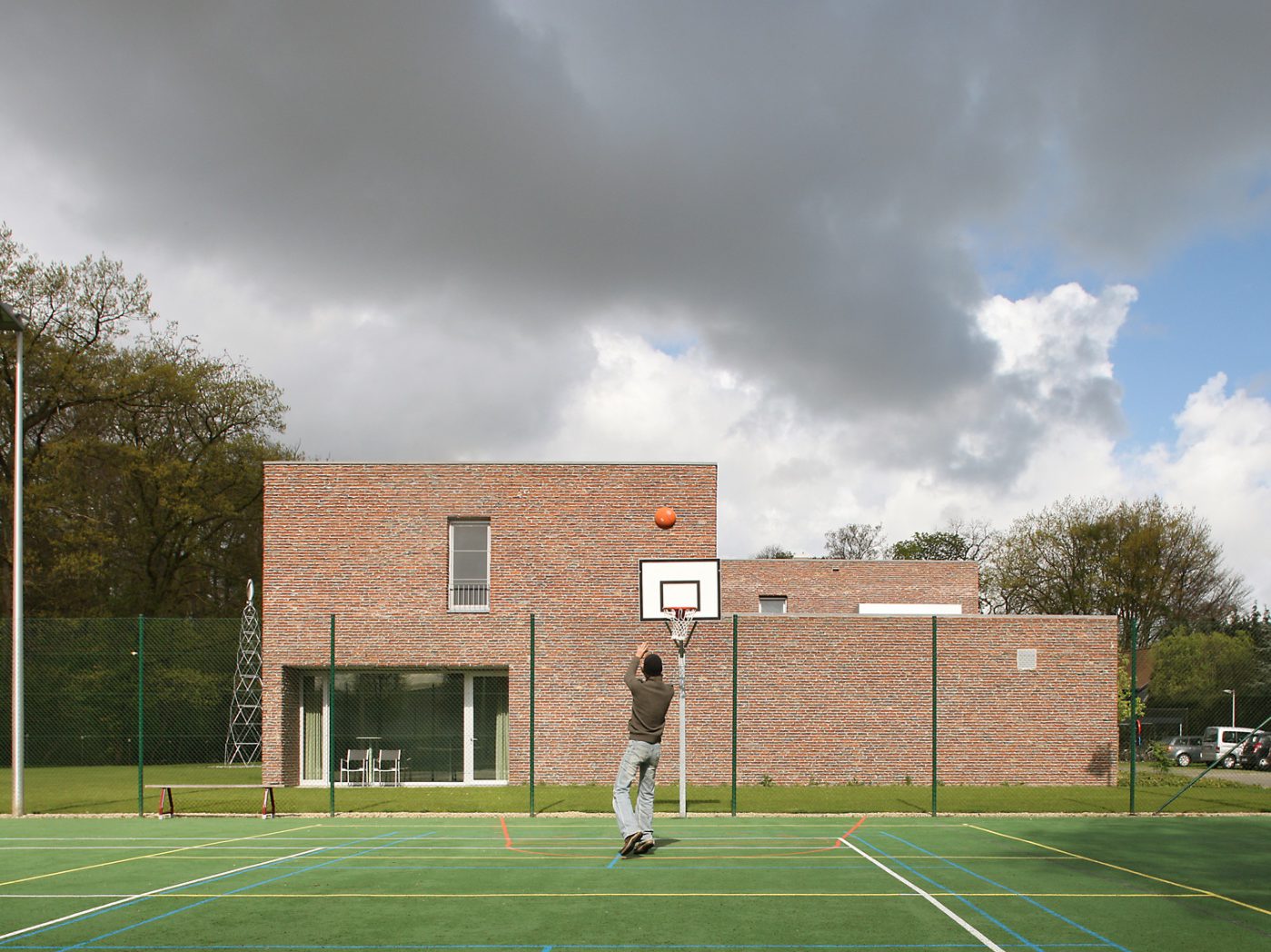 Patrick Lefebure (ArchiPL Architects) designed the new Kasteelplus building in Sint-Denijs Westrem. As part of the Sint-Camillus psychiatric hospital, this centre focuses on integral addiction care. The design for Kasteelplus shows like no other that removing the alienation between patient and environment is an architectural and spatial task par excellence.

Kasteelplus is a separate department of psychiatric hospital Sint-Camillus located in the residential areas on the outskirts of Ghent. The department is nevertheless being marketed with its own name and website. The growing independence of addiction care within the range of mental health care was already started in 1985. At that time, PZ Sint-Camillus started a separate treatment department for alcohol and medication addiction. Until then, patients had only been divided into open and closed wards for men and women. Today, the range of addiction care has been expanded to include a drug unit and a crisis unit. Kasteelplus provides 37 beds in the niche of addiction care out of a total of 180 beds in the entire psychiatric hospital.

The separation of addiction care within the psychiatric clinic is important as the patients requiring addiction care are usually in good physical condition, mentally developed and normally addressable. Kasteelplus also focuses on a short stay of 1 to 2 months and voluntary admission. In addition, the drug unit focuses on the 15 to 25 age group. Therefore, the target group does not easily identify with mental health care and requires an as normal as possible course of treatment. It is striking, for example, that the staff at Kasteelplus do not wear white nurse aprons, so that the distinction between staff and patient is not self-evident. Internally, people prefer to talk about addiction as a chronic problem rather than a mental disorder.

In this context, the addiction care within Saint-Camillus also enjoys a separate housing, first in the neo-Gothic castle set in the middle of the park and since 2009 in Kasteelplus. The design for the new building underlines the autonomy and normalization of the addiction care in various ways. The most striking element is the building location at the back of the green, wooded campus. Kasteelplus leans on the adjacent villa neighborhood and thus enjoys a very residential living environment. This free implantation explicitly distinguishes itself from the other hospital pavilions that were built in a cluster at the main entrance. With this Kasteelplus distances itself spatially from the clinical institute of which it is part, not without also taking advantage of its proximity for logistic support and crisis interventions.

An additional added value of the special spatial location lies in the possibility of accessing the department in an alternative way. Today Kasteelplus has its own entrance via a side street lined up with free-standing single-family houses. In this way the unique environmental factors of Sint-Camillus are used to enable the patients to offer themselves in a discrete way. By avoiding the main entrance of the psychiatric hospital, the possibility of social alienation and stigmatization is minimized. Its own entrance lowers the threshold to the clinic and allows admission to take place directly among like-minded people.

Also in the design of Kasteelplus the reference to a clinical infrastructure was minimized in favor of a receptive, homely atmosphere. The building effortlessly imitates a number of characteristics of the typical Flemish free-standing single-family dwelling. The building is a cubist volume with half-open patios and roof terraces, the facade is executed in traditional brickwork with protruding layers of mortar and the whole is surrounded by a trimmed lawn. On the street side, the centre was given approximately the same dimensions as neighbouring villas in order to extend only far to the rear. The tennis court, which already existed for a long time but was only used by local residents, also adds an extra residential element to a comfortable treatment environment.

The organizing principle in the furnishing of Kasteelplus explicitly moves away from the classic hospital corridor with the typical repitition of anonymous rooms towards the creation of residential and treatment communities. On the ground floor the different rooms are clustered per programmatic unit. Each unit has its own sitting room, kitchen, dining room and treatment rooms. Strikingly enough, this lacks any form of reception desk. Thus, the access to the alcohol unit, called Kasteelplus 1, gives direct access to the kitchen, dining room and sitting room. The various units are strung together by meeting rooms. As in a hotel, all bedrooms are located on the first floor, where the long corridor in turn is broken open with seating areas and terraces.

The architectural and spatial separation of Kasteelplus guarantees that the patients experience the rehab centre first and foremost as a pleasant place to stay. The hospitality of the centre makes the patients open to the care and support it offers as an institution in a relaxed way. In this way, the architectural and spatial framework not only form the basis for a neat living environment for psychiatric patients, but also for the appropriate treatment of a delicate care programme. Central to this is not so much the architectural differentiation of patients on the basis of a specific clinical picture. Much more important is the redrawing of the boundary between the patient and his or her surroundings.

The neighbourhood protest against the construction of Kasteelplus shows that the normalisation of psychiatric care is not self-evident. The argument of the local residents was the depreciation of the surrounding villa grounds due to the increasing traffic in the street. Since the properties of the hospital are designated as community facilities, the resistance of the local residents focused on the intended access between two villas, one of which is owned by PZ Sint-Camillus. The advice of the City of Ghent to organise the access along the railway, rejected by the hospital management because of the existing suicide problem, was enforced via the Flemish Ministry of Welfare, Public Health and Family after a long procedure. The draft amendment shows that society and its regulatory bodies still rely on the sharpest possible demarcation of mentally ill fellow human beings.