The Future is (Not) Here 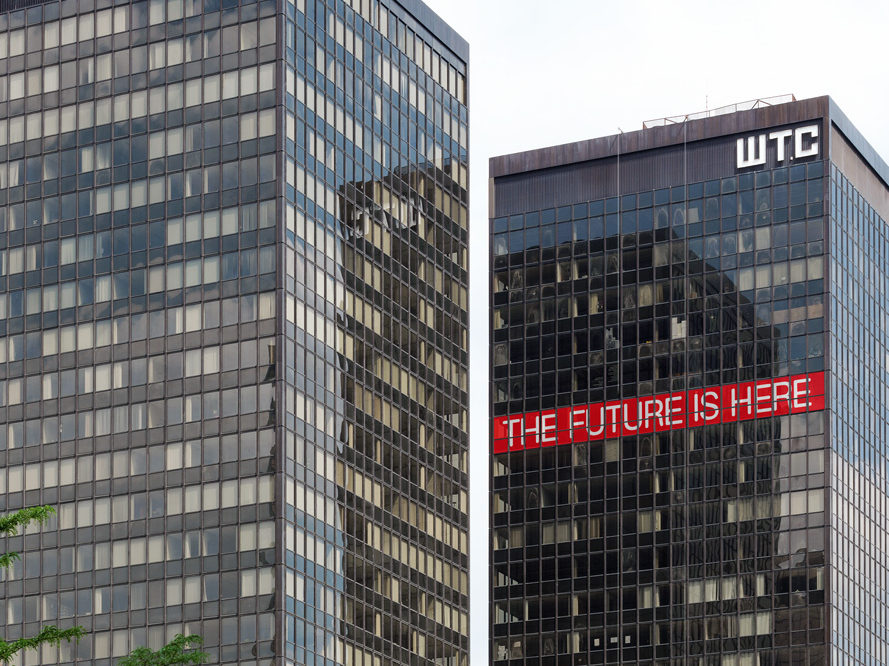 The temporary use of the WTC is coming to an end. On 4 January 2019, the technical installations will be stopped and the tower must be evacuated by that time. The students have mixed emotions. One can feel their resignation about the imminent closure and yet one is hopeful about the follow-up. What next? All users are looking for alternative, temporary accommodation. The plinth of WTC3 and 4, the vacant CCN, the shopping mall of the North Station, the KANAL culture pole and other flight lines are discussed. The question remains as to what exactly will happen with the WTC complex. After experiencing one-and-a-half years of WTC24, students began to identify with the ‘Bruxellisation’ icon of the ‘70s. At the time of the Sofa Talk with Joachim Declerck, the design by 51N4E is still secret. It is an ideal moment to organise a retrospective at the beginning moment. We invite Joachim Declerck to take a seat on the sofa, the director of Architecture Workroom Brussels (AWB) who has held office for one and a half years at WTC16 and a co-curator of the ‘You Are Here’ manifestation that took place in the WTC as part of the International Architecture Biennale Rotterdam (IABR).

The question about the future of the WTC should not solely concern the redevelopment of the complex (design under preparation by Jaspers-Eyers and 51N4E), but it should also focus on the immediate future for its temporary use. The reason to evacuate the WTC Tower was a calculation in which the added value of the temporary use did not outweigh the heavy financial burden of keeping the technical installations in operation (ventilation, electricity, water, lifts, …). The renovation works will probably not start before 2020. Joachim Declerck reacts somewhat resignedly, ‘It shows our fragile position in the WTC. The building remains an Excel sheet, a tool for profit creation.’ The proposition of the You Are Here manifestation was to complete an architectural walk through the WTC complex, thereby allowing many people to cross the thresh-old of a formerly closed-off premises. The property owner Befimmo went along with the story, as part of their aspiration with Up4North to rethink the future of the North Quarter, but one day they did settle the bill.

In the evaluation, Joachim Declerck remain s optimistic, as the eighteen months of temporary use of a few floors does break with trends. ‘In the new developers’ slang, this is called multi-tenant occupation’, says Joachim Declerck, ‘something that until now has been regarded as difficult and complex on the office market.’ The temporary use of the building brought together many different, small tenants onto one floor, and that requires a completely different business model. Over the past few decades, property owners have been keen to conclude long-term leases with government administrations, often for a period of eighteen years or longer. In such a context of guaranteed profit, there was not the least need to think about the future, let alone consider multiple-space usage.

The stagnation in the North Quarter cannot be attributed solely to the real-estate developer. The facility services of the government bear an equally great share of the responsibility. Joachim Declerck says, ‘The government has the power, the tools and the regulations to initiate change, but it behaves like a zapper watching television and choosing between buildings X, Y or Z.’ Today there is a lot of movement in the North Quarter because some long-term contracts will soon expire and the Flemish and Brussels authorities are entering the market in their search for new accommodation. The Brussels architect Kristiaan Borret takes this as an opportunity to make clear that a real-estate project in the North Quarter will no longer be judged on the basis of the aesthetics of the glass façade, but on how it functions as an urban project. As part of the tendering process, a government must impose a visionary framework on the building market.

Architecture Workroom Brussels (AWB) has taken the initiative for Lab- North, a partnership between Up4North (the non-profit left-hand of Befimmo and other real-estate owners in the North Quarter), Vraiment Vraiment, 51N4E and AWB. LabNorth is aimed at initiating a reflection on how to transform the North Quarter into a lively and inclusive district. It was in this context that the temporary use of the WTC Tower, that started years ago with artists on the 26th floor, got extended with the organisation of the AWB and 51N4E office space (at 16), the ‘You Are Here’ manifestation and the organisation of the so-called ‘World Transformation Center’ (in the plinth and on the 23th floor), KU Leuven Faculty of Architecture (24) and later the gathering architects, creative people and civil organisations (at 17, 18 and 25). The roof terrace was subsequently opened for festivities. Joachim Declerck describes the role of the AWB as an ‘instigator, rather than a consumer’. The aim was to attract attention to a positive urban project for the North Quarter.

Surprisingly, Joachim Declerck also con-siders a change in the field of architecture to be necessary. ‘Extensive reflection does not fit into the business model of the architectural profession’, says Joachim Declerck. Architecture competitions always run the danger of sliding into beauty contests and architecture magazines leave little room for the big narratives. Joachim Declerck provocatively calls it a ‘negationism in which 180 we [architects] are only concerned with the feasible’. It is within such a culture that architects (like Vincent Callebaut) easily get away with a wafer-thin story about sustain-ability, green façades and other ecological gadgets. Negationism is also present in the architecture of good taste, particularly when an architecture that tickles the imagination appears to be reduced to a commodity (think of the round villa of Office KGDVS).

The answer of AWB lies in what Joachim Declerck defines as a ‘democracy of doing’. Achieving the climate objectives — part of the Summer Agreement of the Flemish government — is a case in point. In this case, people often think in terms of direct results, such as the electrification of the vehicle fleet, in order to ‘actively not want to know what is coming at you’. In contrast, the aim of ‘You Are Here’ was ‘to create a meaningful context’ in which architects were placed to further the cause of sustainable transition. Transformation sessions were held focusing on waterscapes, the circular economy, biodiversity, sprawl and much more. The set-up was the development of a chain of causation that would stir actors and call them to action: developing working methods, designing questions, defining projects, identifying actors, building coalitions, connecting money, tools and people, and so forth. If the temporary use of the WTC was instrumental for one thing, it was about functioning as a cultural incubator for a discursive design practice that aimed to formulate the right question and bring the right people together.

Published in Gideon Boie, Dag Boutsen, a.o. (eds.), WTC Tower Teachings, reports from one and a half years of nomadic architecture education in Brussels, KU Leuven Faculty of Architecture, Brussels 2019