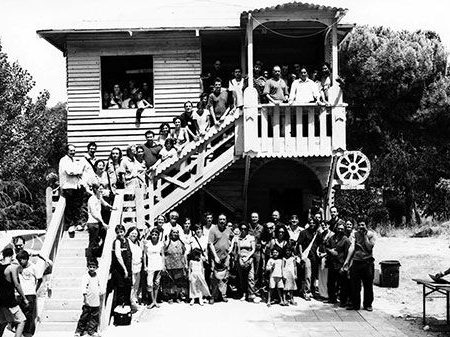 In studying the link between architecture and activism we cannot but take a close look at the ‘Savorengo Ker’ project of Stalker/Osservatorio Nomade.

The title of the Savorengo Ker project reads as ‘The House of All’ in Romani language. The work is about a wooden chalet-like structure in the informal settlement Casilino 900, a non-authorised and non-equipped settlement of around 650 Roma people located in the outskirts of the City of Rome. The construction of the wooden chalet was done collectively with residents of the camp and a group of students from the Rome Tre University. The vernacular aesthetics reflects the housing desires of the people involved. The production of the chalet used a 8000 euro project budget provided by the University.

The idea was to come up with an alternative to the standardised containers used in the socalled ‘solidarity camps’ set up by the leftist Prodi government at that time. The group wanted to proof that something more genuine could be constructed with less money. The other clear ambition was to open up an alternative way of doing in contrast to what they referred to as the ‘solidarity apartheid’ installed by the government. The house for all was a bottom-up construction – or better a work of ‘auto-construction and reciprocity’ as the poster puts it – using available human resources in the camp.

The Savorengo Ker project caused fierce protest by people in the neighbourhood who feared that the domestication of the Roma would legitimise and normalise the existence of the informal settlement. Communist and fascist groups alike were organising marches to protest the engagement with the nomads. In any case the humanisation of the settlement conflicted with corporate interests in the new solidarity camp constructions (allegedly a million euro investment).

The wooden chalet was burned down in December 2008. Mist surrounds the cause of fire – some claim the fire is a result of bad electricity work, others claim the house is deliberately set on fire by people unknown. The Casilino 900 camp was closed in January 2010 and everybody was transported to the newly opened solidarity camp.

The history of Savorengo Ker provides us with a few guidelines on architectural activism.

First of all, the Stalker group wanted “to tackle actual needs… instead of taking refuge in theory, politics and architectural utopia” – said Francesco Careri. He presents the Savorengo Ker as a staunch critique of the famous New Babylon work by Dutch architect Constant, an architectural work iconic for the Situationist movement during the 1970-ies. New Babylon wanted to provide concrete utopian images for a “the nomad city which, after the Situationist Revolution, would have abolished work and the need for a stable residence and that would have inhabited a land without borders, by ramifying itself out in a continuous flux, creating a new itinerant multicultural mankind – the wandering New Babylonians.”

Franscesci Careri writes how he was surprised to hear from Constant (meeting him in 2000) that the New Babylon work was triggered during a Situationist meeting at Alba where artist Pinot Gallizio allowed Sinti gypsies to settle on his land. It allows Careri to turn the Situationist lingo against its own masterpiece: “The Sinti camp could have been a common ground for putting their creative and relational skills into practice, on which to experiment the self-building of a multicultural city to be planned and carried out in a playful, interdisciplinary and participative form.” This is exactly what the wooden chalet did. It brings us to the second lesson on architecture and activism: Savorengo Ker resulted after “plunging body and soul into the many forms of forced dwellings of the nomad universe.” It did go on where others usually stop and where fascination of a distant gaze allow to dream away in utopian images.

The third lesson is that the utopian images, the fascinating reflections of a distant gaze, is turned into reality by building collectively a manifesto house. The Savorengo Ker “demonstrated that the city can be built by passing each other a hammer and some nails.” Continuing: “The building of the house was one of the best moments for sharing our cultures, an occasion for merrymaking, play and participation; it was a month of collective utopia deeply felt and lived by all.” It allows Careri to conclude: “New Babylon can be achieved by collectively nailing the planks of a roof.”

The fourth lesson is not to take the Savorengo Ker as the ultimate product of activism, but “to relaunch [it] to a greater magnitude”. Freezing the manifesto house as a prototype to be cloned – as was proposed by the Prefecture of Latina – would not only be too easy, but also a betrayal of the reciprocal spirit that initiated it. And so it happened that the dream was expanded: “not just one house, but a group of houses, a kind of self-built condominium, with not only the Roma, but also Italians and including other migrants. We need to prove that not only are the Roma capable of organising themselves to work and are skilled builders, but that they can build their house together with other cultures, and that they can be very good neighbours for all.”

Published in the Lessons in Urgency blog at De Wereld Morgen