Psychiatric care with a view 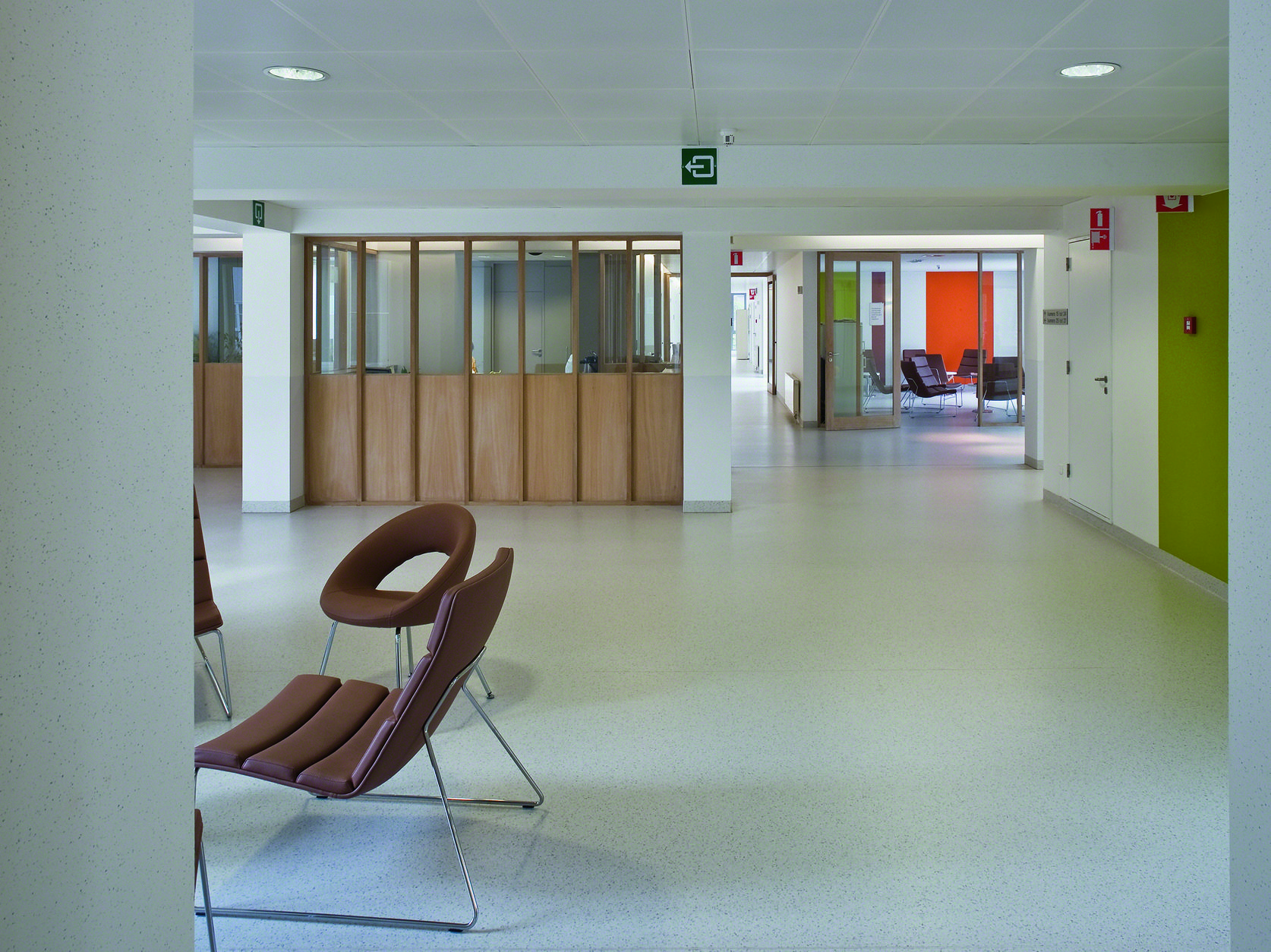 Hans Verstuyft architects carried out the conversion and extension of the Psychiatric Department (PAAZ) at the Imelda Hospital in Bonheiden, a leading regional care institution with 1,500 staff and 160 doctors. The Psychiatric Department offers admission to a non-closed environment on a free-will basis and is housed in a corridor one hundred metres long somewhere at the back of this immense hospital complex.

A distinctive feature of this corridor is that it only has rooms on one side, facing south and looking out over the garden and a wood. The corridor is a remnant of a former sanatorium run by the nuns of the Convent of Bethlehem that was founded in 1933. The original sun terrace on the roof has since been converted into an extra storey where the Maternity Department is now housed. The growth of the hospital over the years means that from the main entrance the Psychiatric Department now has to be reached via a chaotic tangle of added wings.

The renewal of the Psychiatric Department comprises the renovation of the corridor and its extension by means of a transverse wing. The old sanatorium corridor provides access to twenty single rooms and is awash with light from the high windows. The new wing contains rooms for two patients (on the garden side), doctors’ consulting rooms and activity rooms. The transverse extension does have a central corridor 2.4 metres wide with rooms on both sides, which makes it dark. But extra light and views are ingeniously introduced by leaving open spaces for patios where rooms might have been and also by making the new building distinct from the original one. The façade is striking for its finish in grey-painted brick and the façade structure in concrete columns that stands in front of it, and this gives the Psychiatric Department a distinctive colour and pattern within the existing hospital complex.

The architect had three different results in mind for the cross-shaped arrangement of the department. Firstly, the interruption of the old sanatorium corridor was meant to give the department spatial cohesion. The intersection of the renovated corridor and the new transverse wing provides a suitable place for reception, meeting and monitoring. At the same time, the change allows the old corridor to act as the backbone of the department to which various service areas are attached. In this way the Psychiatric Department becomes a fully-fledged department in the spatial sense too, distinguishing itself from the rest of the broader hospital complex, something that is accentuated by the treatment of the façade.

Secondly, the (architectural) intervention is intended to enable the department to make full use of the peaceful green location on the edge of the hospital complex. With its patios and vistas, the design arranges for the maximum connection between interior and exterior. The impact of the building volume is also very cleverly and almost inconspicuously reduced by means of its diminishing height. While on the north side the transverse wing has two storeys (the uppermost containing an extension of the Maternity Department), on the garden side it is limited to just the ground floor. In this way, the harmony of the parklike surroundings (mainly on the south side) contributes to the therapeutic value of the building.

The third effect aimed for is the residential character of the department, both internally and externally. Again unlike what one usually finds in designs for hospitals, it is very important for a psychiatric department that the architectural design responds to the patients’ state of mind. The staff do not wear hospital uniforms, and in the same way the architectural design is intended as far as possible not to evoke any clinical, functional and coercive atmosphere. The design evokes the desired domestic atmosphere by installing open sitting rooms and meeting rooms at visible central locations. In a minimal way, the colourful treatment of the walls also makes a contribution to the receptive atmosphere of the department. The concrete façade structure in front of the outer walls gives the rooms a serene cell-like character by framing the view of the wood and preventing people from looking in. Lastly, the extending orange sunshade enhances the residential feel of the department and also guarantees that the view out is also possible when it is open.

It is not only the patients, but also the department itself that benefits from the well-considered architectural and spatial design. The contentment of the patients leads to higher occupancy, which is handy in financial terms. But the care staff themselves also gain from much more effective monitoring of the department because of the improved overview. The new entrance in the northern transverse wing makes access to the department easier for both staff and emergency services, which is good for the proper functioning of the isolation cells and the Maternity Department on the upper floor. Lastly, the load-bearing façade and corridor structure means the department can also be freely defined and can in future easily be reorganised. The old entrance to the corridor, reduced to a side entrance in the design, remarkably continues to function as a main entrance for patients and visitors. This shows that the department’s own architectural and spatial identity remains only a small part of the eclectic whole of the hospital complex, which today remains in constant growth and mutation.

The architect of course has little impact on the overall incoherence of the hospital complex. The technical department itself indicates that this means complete demolition and new building will in time be inevitable. But it is striking that Hans Verstuyft architects were originally contracted — by the mediation of a portfolio presentation by the Flemish Government Architect — as the new in-house architect. The range of assignments ranged much wider than just the Psychiatric Department and included the Pediatrics Department, the restaurant, cafeteria and quiet room, and offices for the board of directors and management. This broad brief presented the possibility of a clean architectural sweep and of converting several departments on the basis of a single all-embracing vision, what the architect calls a growth model. In the course of the design process, however, the brief was restricted to this one department and a number of smaller changes (e.g. the conversion of the chapel into a room for seminars).

However, the alarming lack of any growth model covering the whole campus detracts from the architectural quality introduced in the Psychiatric Department. In the course of the conversion, for example, the temporary Surgery 5 wing was erected overnight on the boundary of the grounds and the wood. By basing it on a steel construction with prefab façade panels in which windows were cut out after installation, the production time was limited to barely three months of working day and night. This quick fix turned out to be necessary so as not to lose the subsidy allotted by the VIPA.

The new temporary wing, which in principle must be demolished again after ten years, now forms the new horizon for the Psychiatry Department. In the light of this ad hoc spatial arrangement and disposable architecture it seems more necessary than ever to make an architectural and spatial masterplan part of the compulsory strategic care plan (ZSP). Though a commitment is needed from the Flemish Government Architect that extends further than the supervision of the choice of architect, and also covers the strict follow-up of the design process.