Plea for an uncreative city – a selfinterview 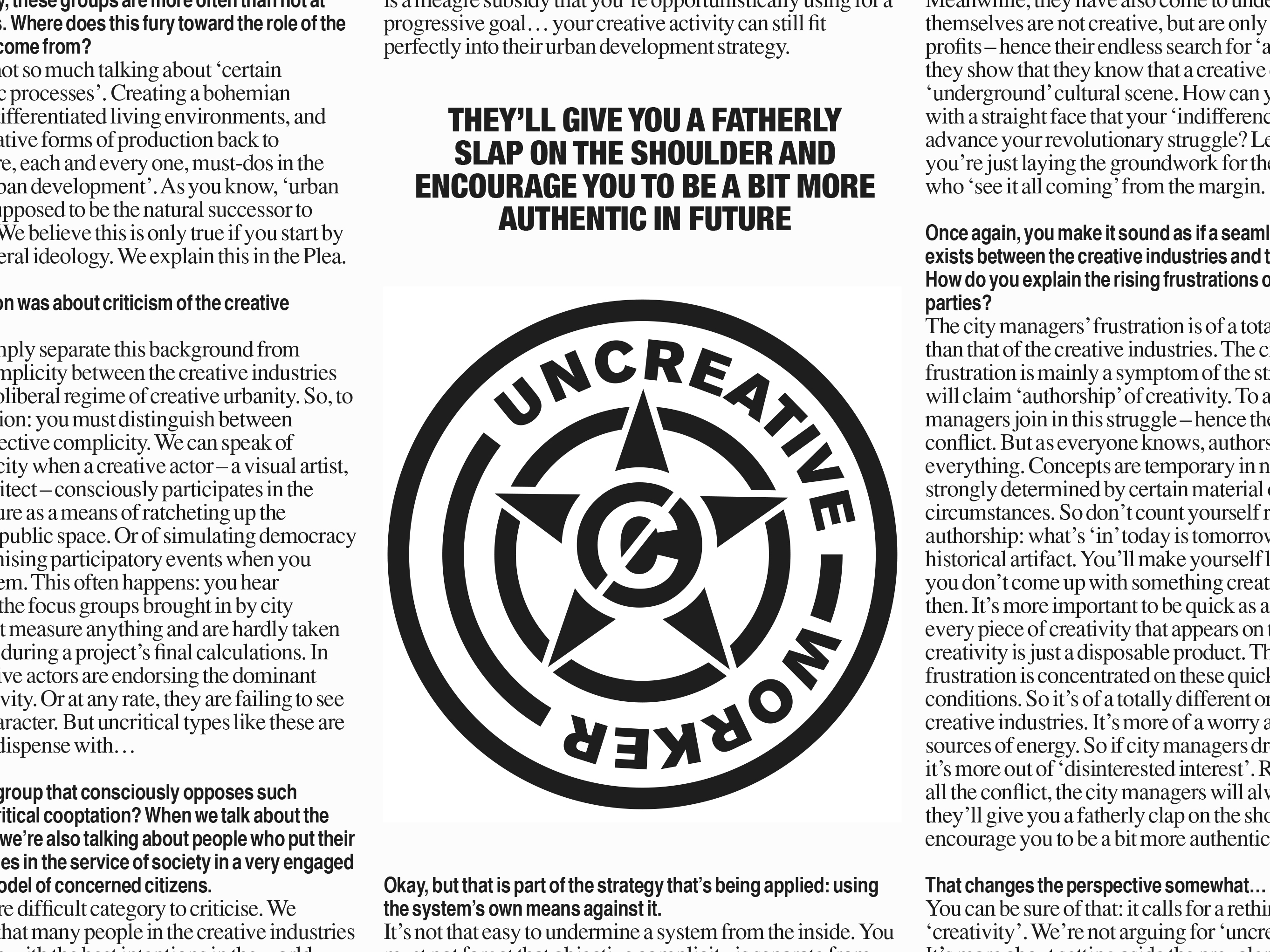 In the ‘Plea for an Uncreative City’, you make a remarkable argument. You say that the creative industries, given their instrumentalisation in the function of certain political-economic processes, should make efforts on behalf of ‘uncreativity’. Aside from the question of what it means to be uncreative, I wonder in the ﬁrst place if it’s meaningful to assume a conspiracy theory. Okay, creative talents are often taken in by crude manipulation on the part of political and economic interests. They’re often asked to live in buildings to prevent them being squatted, and are used to creating a bohemian climate. This can appear to the outside world as if the creative industries are the lapdogs of real-estate agents and the government. But don’t forget that this only a half-truth. In reality, these groups are more often than not at each other’s throats. Where does this fury toward the role of the creative industries come from?

First of all, we’re not so much talking about ‘certain political-economic processes’. Creating a bohemian climate, creating differentiated living environments, and bringing light, creative forms of production back to residential areas are, each and every one, must-dos in the ﬁeld known as ‘urban development’. As you know, ‘urban development’ is supposed to be the natural successor to ‘urban planning’. We believe this is only true if you start by assuming a neoliberal ideology. We explain this in the Plea.

Fine, but my question was about criticism of the creative industries…

Well, you can’t simply separate this background from criticism of the complicity between the creative industries and the current neoliberal regime of creative urbanity. So, to answer your question: you must distinguish between objective and subjective complicity. We can speak of subjective complicity when a creative actor – a visual artist, a designer, an architect – consciously participates in the current use of culture as a means of ratcheting up the spectacle value of public space. Or of simulating democracy there by, say, organising participatory events when you don’t believe in them. This often happens: you hear architects say that the focus groups brought in by city governments don’t measure anything and are hardly taken into consideration during a project’s ﬁnal calculations. In this case, the creative actors are endorsing the dominant deﬁnition of creativity. Or at any rate, they are failing to see its problematic character. But uncritical types like these are easy for a critic to dispense with…

But what about the group that consciously opposes such uncomfortably uncritical cooptation? When we talk about the creative industries, we’re also talking about people who put their professional activities in the service of society in a very engaged way. They are the model of concerned citizens.

This is a much more difﬁcult category to criticise. We deﬁnitely believe that many people in the creative industries are doing their jobs with the best intentions in the world – and thank goodness. In the many reactions we received to the ‘Plea for an Uncreative City’, one category stuck out. Speciﬁcally, it was the group that wholeheartedly approved of our criticism of the neoliberal misuse of creativity on the one hand, and on the other made clear that their own participation in these policies did not conﬂict with their own assumptions. After ﬁrst expressing their unhappiness with the current ‘neoliberalisation’ of creativity in no uncertain terms, they proceeded to give an account of their own furious battle with these powers. One emphasised that he had received no subsidies for his contributions. Another argued that their progressive initiative was mainly a thorn in the side of governments and project developers and gave an account of the heroic battle they had fought to realise their plans as well as possible. Still others were proud of the way in which they had opportunistically secured government subsidies: if you stay good friends with the city council on the ofﬁcial level, on the substantial level you can keep doing your own thing.

It is here that our notion of objective complicity is relevant. We argue that the absence of a relationship with government – or the presence of a negative relationship – does not mean that the cultural forces in question are not objectively complicit in the creative-city regime. By this we mean that, however much resistance an alternative cultural initiative might have encountered, it doesn’t take away from the fact that it functions very well within the urban economy as proof of the city’s high creative factor. In spite of themselves, many alternative cultural projects are communicating to the outside world that the city possesses a happening urban subculture – which is precisely what the city managers would like to see happen in their attempt to attract investors and highly qualiﬁed workers. Creating a bohemian climate has everything to do with conscious, concerned citizens who go their own way and don’t allow themselves to be slotted into the system just like that. This is objective complicity: even if as a creative actor you are ignored by the government or market, you have no ambition whatsoever to work with them, and your only link with them is a meagre subsidy that you’re opportunistically using for a progressive goal… your creative activity can still ﬁt perfectly into their urban development strategy.

Okay, but that is part of the strategy that’s being applied: using the system’s own means against it.

It’s not that easy to undermine a system from the inside. You must not forget that objective complicity is separate from subjective attitudes. With all due credit, in practice, most heroic stories about ‘subversion from within’ are nothing more than a bunch of words that serve to cloak one’s own actions in innocence. A lot can be said about ‘subversion from within’, but you have to take into account all the conditions – where, how, and in order to do what? If you don’t, you might as well forget it. With that kind of strategy, you’ll inevitably end up in the position of what Immanuel Wallerstein, speaking about racism, called the unpaid agents of the ruling order. In the case of the creative industries, we’re talking about the unpaid agents of the ruling neoliberal order.

Are you saying that the creative industries should simply assume their own strength? Would it help if we just stopped lying awake worrying about the cooptation of the term ‘creativity’ by city managers? Maybe then it would become clear that their creativity is just a farce.

This strategy, too, is quite popular among cultural activists. We are, however, as sceptical of the strategy of indifference as we are of the strategy of working from the inside. The argument is that cultural forces that dislike the dominant discourse about creativity should simply keep searching for alternative forms of creativity. History will decide which deﬁnition wins. This position strongly resembles that of the ‘multitude’, as Michael Hardt and Antonio Negri describe it in their manifesto Empire. The multitude, they argue, is the new revolutionary subject, and in its struggle it should not relate itself too closely to the existing political channels or economic systems. By realising its own desires in the ﬁrst place, sooner or later it will effortlessly make the existing order superﬂuous and irrelevant. This oppositional strategy sounds great, and yet it is naive. It does not see how, in practice, subversive, creative actions that situate themselves miles away from political, ideological or economic games and do their own thing precisely conﬁrm the dominant discourse about the creative city.

You have already argued that. How does it further the discussion?

Well, by saying that regardless of which strategy you employ, you must always keep in mind that the ruling ideas are not those of the rulers. It was Slavoj Zizek who improved upon Marx with this formula. Without doing violence to reality, we can say with conﬁdence that this is also true for the creative city. After all, doesn’t everyone agree that it wasn’t the city managers who invented the creative city? Meanwhile, they have also come to understand that they themselves are not creative, but are only good at bringing in proﬁts – hence their endless search for ‘authenticity’. In this, they show that they know that a creative city arises out of an ‘underground’ cultural scene. How can you then announce with a straight face that your ‘indifference’ is helping you to advance your revolutionary struggle? Let’s be honest, you’re just laying the groundwork for the city marketeers who ‘see it all coming’ from the margin.

Once again, you make it sound as if a seamless collaboration exists between the creative industries and the city managers. How do you explain the rising frustrations on the parts of both parties?

The city managers’ frustration is of a totally different order than that of the creative industries. The creative industries’ frustration is mainly a symptom of the struggle over who will claim ‘authorship’ of creativity. To a degree, the city managers join in this struggle – hence the continuous conﬂict. But as everyone knows, authorship isn’t everything. Concepts are temporary in nature and are strongly determined by certain material or political circumstances. So don’t count yourself rich if you have authorship: what’s ‘in’ today is tomorrow’s worthless historical artifact. You’ll make yourself look ridiculous if you don’t come up with something creative every now and then. It’s more important to be quick as a ﬂash to exploit every piece of creativity that appears on the scene – after all, creativity is just a disposable product. The city managers’ frustration is concentrated on these quickly changing conditions. So it’s of a totally different order than that of the creative industries. It’s more of a worry about access to new sources of energy. So if city managers drop a creative group, it’s more out of ‘disinterested interest’. Rest easy: in spite of all the conﬂict, the city managers will always be back; they’ll give you a fatherly clap on the shoulder and encourage you to be a bit more authentic in future.

That changes the perspective somewhat…

You can be sure of that: it calls for a rethinking of the label ‘creativity’. We’re not arguing for ‘uncreativity’ just for fun. It’s more about setting aside the prevalent compulsion to be creative and creating a conceptual space in which we can think about the fate of the creative industries themselves. We must stop complaining about the recuperation and cooptation of so-called authenticity by the existing order. We all know those mantras, and they often can’t disguise the fact that they’re simply proof that the creative industries themselves don’t know which way to turn. Can we please have a little self-knowledge and self-criticism? The designer Daniël van der Velden was absolutely right when he said that the ‘creative industries’ label is very dangerous because it obligates designers to be permanently creative. It supposes that as a designer, artist, or whatever, you can never stop being creative. You must pull something novel out of your hat again and again, because this is part of the nature of creativity. If ‘creativity’ still has any meaning for the creative industries, then it’s about time it unleashed its creative ability on breaking through all this crude blackmail for what it is.

In this self-interview, we take up some ‘frequently asked questions’ concerning the ‘Pleidooi voor een oncreative stad’ (‘Plea for an Uncreative City’), which comprised part of the Reinaart Vanhoe exhibition Neo-beginners in TENT, Rotterdam Center for the Arts, in September 2006.