Liberation and restoration in Barcelona 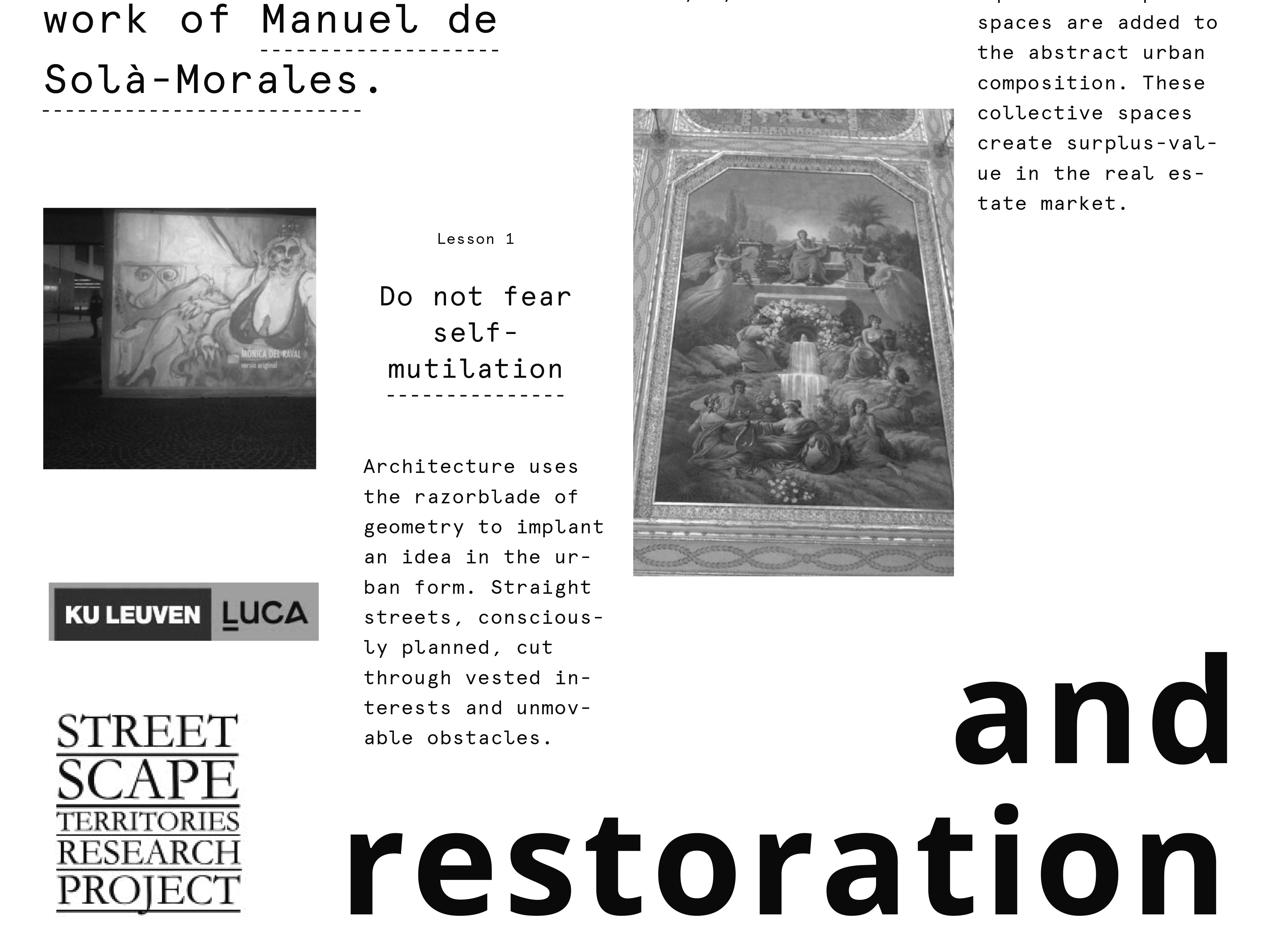 Ten original lessons that define and fathom the territorial depth of the Barcelona streetscape. The ten lessons originate from the ground breaking work of Manuel de Solà-Morales.

Do not fear self-mutilation

Architecture uses the razorblade of geometry to implant an idea in the urban form. Straight streets, consciously planned, cut through vested interests and unmovable obstacles.

Each failure is a gain

Architecture displaces the barycentric urban form by wrapping around economic-military processes. Eventual failure of the displacement is a gain, as it grants the city a new façade and horizon anyway.

Form does not matter

Architecture lays out the plot module as the growth factor of an advanced capitalist real estate system. Squares and open spaces are added to the abstract urban composition. These collective spaces  create surplus-value in the real estate market.

Is the Barcelona Streetscape the result of self-mutilation? The terrain of economic-military power? A speculative growth machine? Yes! And MORE.

Radial roads extend the city to the underdeveloped country side. They may be imprecise but nonetheless consolidates a new order on the territory. An unordered No man’s land can  finally be measured in relation to a fixed axis. The roads allow for the easy transport of goods and people.

The isotropic, orthogonal streetscape follows strictly its internal reasoning in accordance with the technical requirements of traffic and hygiene. It imposes itself autonomously and absolutely. The urban grid is a mechanism for the capitalist management and finan-cing of the city. It is focused on the needs of the bourgeois. The new equilibrium reserves the Old City for the working class.

Disorder is an asset

The morphological configuration may be absurd, disorganised and fragmentary, it is nonetheless original and enduring  as long as the configuration is the outcome of the laws of the geography it occupies.

In studying the inclusive character of the Raval neighbourhood I bounced upon the ‘Ten Lessons on Barcelona’. It became my sole guide to the city and absolute point of reference for discussion. Ultimately the ‘Ten Lessons’ recount the story the Barcelonese are telling about themselves. It enables us to go beyond the daily use and misuse of a city and grasp the Real depth of the Barcelona streetscape.

The ten lessons provide as many Anchoring Points to put a stop on the stream of consciousness generated in Barcelona. Does the ten lessons sounds too much an imperative? Possibly, but remember that domination comes not through the imposition of a theory, but only by sketching an open set of impressions, associations, suggestions, images, etc.

Admittedly, I didn’t finish reading the Book. If you want to know more, you will have to read it by yourself. I withdraw from comment and leave the explanation for your own vivid imagination. Architects have no single solution for every complex problem. Nor can we simply unravel the mystery of Raval.