Charles Jencks is a good starting point for a critique of the ‘healing environment’, though this may sound odd. This eminent theorist wrote a historical work on the use of iconic and ironic visual idioms in postmodern architecture as early as 1977. Buildings were conceived as a ‘gigantic metaphor that proclaim their own function’.

One example of this sort of rhetorical architecture was the Odakuyu Drive-In Restaurant designed by Kurokawa. It was a steel structure with a floating box (referring to its function as a restaurant) and a floating sailcloth (referring to its function as a beer garden). Antonio Gaudi’s Casa Batlo in Barcelona also functioned as an example of a building that generated new meaning by means of a large number of metaphors and symbolic references.

What is less well known is Charles Jencks’ involvement in the development of Maggie’s, a foundation for the support of cancer sufferers set up after the death of his wife. Since 1995, twenty-odd care centres have been set up all over Great Britain. They are conceived as independent care centres on the margins of the major National Health hospitals.

Some leading architects were mobilised to design these Maggie’s Centres. Rem Koolhaas, Zaha Hadid, Kisho Kurokawa, Richard Rogers, Norman Foster, Frank O. Gehry and many other celebrated architects have been responsible for a whole series of striking buildings – each crazier and more eye-catching than the next. The purpose was to establish an ‘architectural Petri dish’ in which completely different forms were created on the basis of the same specifications.

To give one example, ‘kitchen-centred’ is an element that recurs in the designs for all the Maggie’s Centres. Each one is built around a kitchen that is stationed centrally at the entrance to the building. The kitchen is a symbol of hospitality and encounter. We see the postmodern logic of the 1970s showing through in these kitchens. In fact the whole building is a gigantic monument in reaction to the institutional hospital factories.

The iconic architecture turned out to be a clever commercial approach. With a certain sense of irony, Jencks openly admits that the engagement of the impressive list of star architects yielded a lot of free advertising in newspapers and magazines. The iconic architecture was good for fundraising. However, the fundamental question is whether the architecture also has a positive impact on health.

In one of his essays, Jencks describes how, during an interview on BBC radio, he was embarrassed by precisely this question. He reacted stoically. His position was that even if architecture had a positive impact, it is still virtually impossible to verify. The scepticism is understandable, as it would be rather presumptuous to proclaim that architecture had any influence in the face of death. At times of pain and sorrow, a term such as ‘healing environment’ can sound very cheap.

Jencks then describes how, in the same interview, he was contradicted by a National Health doctor who was wholeheartedly committed to iconic architecture. This doctor saw the importance of the exceptional quality of Maggie’s Centres not in any supposed healing powers, but in a pleasant working environment. His position was that care staff who feel good provide better care to those in need.

Jencks situates the second psychological effect of the architecture of Maggie’s Centres in what is described as the Hawthorne Effect. The staff do not feel better as a result of a direct causality between form or colour and human behaviour, but because they were for the first time asked by the management what high-quality space for care in the workplace actually means.

This shifts the discussion on care architecture for the second time. Apart from the design of a specific space, a healing environment is at least as much a matter of the thoroughness of the design process. The design of hospitals is all too often viewed as a technocratic application to space of a static view of care. By contrast, Maggie’s Centres show how architecture becomes a reality in its profound commitment to its users.

It would be best not to apply the ‘healing environment’ label too lightly as a cheap excuse for the new decoration of old hospitals. Care architecture in the first place requires a new design culture in which critical commitment is possible from the boardroom to the workplace. 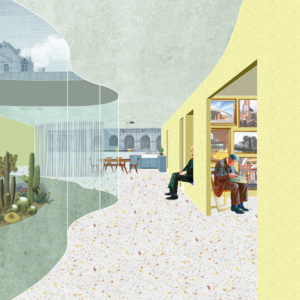